The first meeting of teachers and students corresponding to the second year of our Erasmus project, “A Journey in Time”, took place between March 11 and 15 in the town of Calenzano, near Florence.

It was a journey full of expectation that led us to the beautiful city where Cosme III was born and lived, a privileged place in the History of Art.

On Monday we were received by the director and the teachers in the auditorium of the institute. After a tour through the institute, we were treated to a delicious breakfast and a fun photo session in the Art classroom, where students and teachers were dressed in the style of the court of Cosme III.

Next, Novella, the Music teacher, made us participate in a “Drum Circle” in her classroom, which turned out to be an interesting and novel experience for most of us.

After lunch, we all met in the gymnasium of the institute. There took place an extraordinary parade with flags, trumpets and dance in the style of the seventeenth century. Once finished, we went to the town hall, where we were welcomed by the mayor, who expressed his satisfaction for how much this kind of Erasmus projects benefit the education of young people. 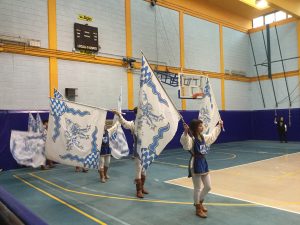 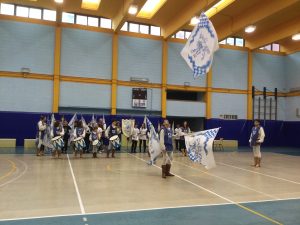 The day ended with a dinner for teachers and students at the Casa del Popolo in Calenzano. It served a delicious sample of Tuscan food and ended with songs in chorus. A perfect day to create the bonds of coexistence and friendship that continued to be throughout the week.

On Tuesday, the first visit to Florence took place, in the form of a fun Gymkhana prepared by Italian teachers and students. The tour began in the beautiful Plaza de la Annunziata and included visits to such extraordinary monuments as the Palazzo Vecchio and the Palazzo Medici – Ricardi. The lunch at the “Sabatino” trattoria was an example of Italian culinary tradition. 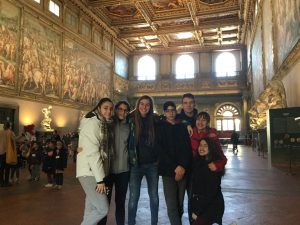 In the afternoon, at the Laurentian Library, we lived one of the most exciting moments of the week when we were received by the director of the institution, who allowed us to contemplate the original of the chronicle of the Grand Duke’s journey through the Peninsula, written by Magalotti and illustrated with Baldi’s precious watercolors. 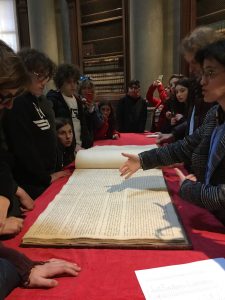 The next day, again at the institute, we played our own version of the Game of the Goose, on a board that occupied the entire floor of the auditorium and in which, like boxes, the drawings made by our students of the different places visited by Cosme III on his trip. The game was very exciting and, once finished, with the victory of Galicia, we proceeded to collect all the drawings, in order to make with them a beautiful exhibition that was maintained during the other days of the meeting. 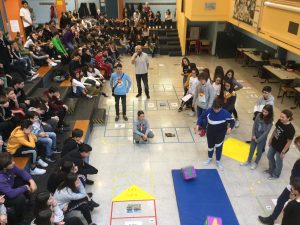 After a lively lunch in the institute, we went by bus to the Villa of Poggio a Caiano, the beautiful summer residence of the Medici, which had so much to do with the life of Cosme III, since his wife Margarita Luisa of Orleans spent long periods over there. 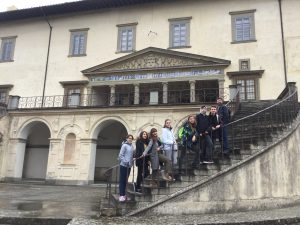 On Thursday we spent all day in Florence, visiting some of its artistic treasures. We began with the Chapels built by Michelangelo for the Dukes Lorenzo and Giuliano, without doubt one of his best works. We then went to the Grand Dukes’ chapel, where the cenotaph of Cosme III is. To that one we paid a well-deserved tribute since we owe him the fact of having been embarked on this interesting project. 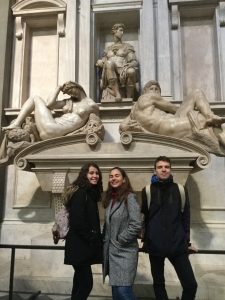 Then we continued to Santa Croce, although we did not have an opportunity to enter it, due to the lateness of the hour.After lunch, we visited the Pitti Palace, residence of the Dukes of Tuscany and one of the most extraordinary painting museums in Europe. The rest of the afternoon was spent walking through the Boboli Gardens.On Friday, we remained the whole day in Calenzano. In the morning, an excursion through the beautiful countryside of Travalle and at night, an unforgettable farewell party at the institute.

The next day, the melancholy of the farewells at the airport was compensated by the happy promises of being soon together in Cordoba again. 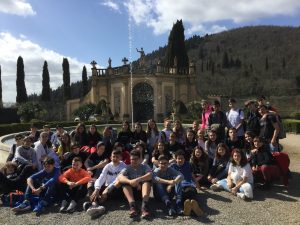