During the week from 27th to 31st of May we held in Cordoba the last meeting of our project “A Journey through Time”. The delegations of Italy, Portugal and Galicia were arriving last weekend, welcomed by teachers and families from Cordoba. 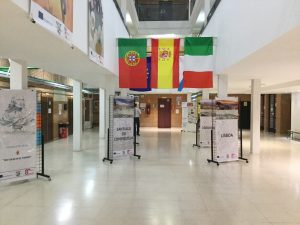 On Monday we visited the Mosque-Cathedral and attended a concert at the Church of San Francisco. This concert, interpreted by the soprano Lucía Ruiz Tavira, former student of the IES “Medina Azahara”, was intended to be a recreation of the musical evening that Cosme III attended during his visit to Córdoba, in 1668. The program included works by Vivaldi, Scarlatti, Händel, Pergolesi, as well as a selection of Spanish songs accompanied by theorbo. Afterwards, we all returned to the institute, where we enjoyed a welcome “perol”. 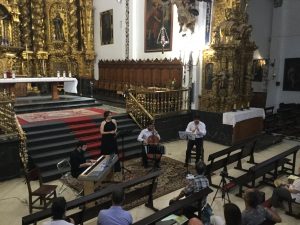 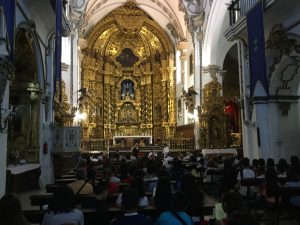 On Tuesday, all the participants in the project left the institute to visit the Synagogue, the Royal Stables and, later, the Fortress of the Christian Kings, where we were received and entertained by the Delegate of Citizen Participation. 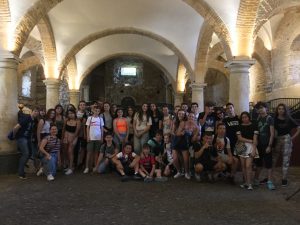 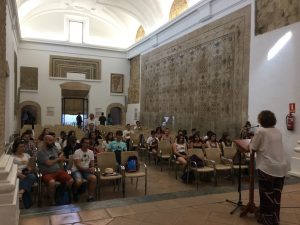 In the afternoon, students and teachers met in a booth at the fair, where they received flamenco lessons and enjoyed that typical Cordoba festival. 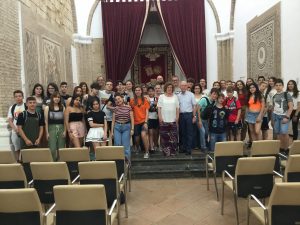 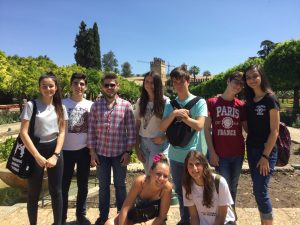 On Wednesday we went up to Medina Azahara, where we visited the museum and the archaeological site. In the afternoon, we did a tour around Córdoba on the tourist bus and ended up in Corredera Square. 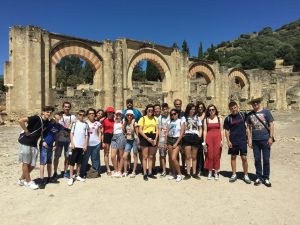 On Thursday we had the excursion to Seville. There we spent all day, enjoying the beauty of the city, despite the enormous heat. In the morning we visited the Church of El Salvador and the Plaza de España, where the students had the opportunity to take a boat ride. In the afternoon, we spent several hours in the Royal Palace, admiring the magnificent gardens and drawing rooms.

On Friday we went to the Palace of Viana, famous for the beauty of its courtyards. Later, we visited a popular courtyard, where a municipal guide explained the history and content of the courtyards competition, recently declared Intangible Heritage of Humanity by UNESCO.In the evening we enjoyed a farewell dinner in a typical Cordovan inn. That was the endearing end of a week full of learning and friendship.