On the morning of Saturday, May 12, the Cordovan delegation of the Erasmus “A Journey through Time”, integrated on this occasion by the teachers José Gómez and Alberto Rubio and the students Sergio Ruiz, Hugo Domínguez, Julia Perales, Rocío Prats, Carlos Navarro and Angel Pérez, following the path went by Cosimo III and his courtiers in the seventeenth century, left for Lisbon,

After a cheerful lunch in the beautiful city of Evora, where we had the opportunity of visiting the Roman temple and the cathedral, with its splendid dome and its solemn Gothic cloister, we arrived in Lisbon. There, in the lively Plaza de los Restauradores, the families and Saulo, one of the Portuguese teachers who most involved are in the project, were waiting for us. The welcome was very warm and cordial, according the well-known Portuguese hospitality and courtesy. 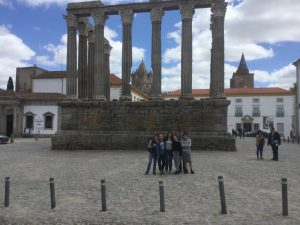 On Sunday morning, the Spanish group and its Portuguese hosts visited the Gulbenkian Museum, one of the best private art collections, bequeathed to the city of Lisbon by the Armenian millionaire and exquisite “connoisseur”, Caluste Gulbenkian. The paintings of Rembrandt, the Egyptian reliefs, the Persian weavings, the Lalique jewels, delighted everyone.

On Monday we were welcomed at the Escola Nuno Gonçalves to the sounds of the students’ orchestra. We were entertained with sweets and flowers, received the formal welcome from the teachers and school managers and carefully contemplated the exhibition dedicated to the stay of Cosimo III in Lisbon. In the afternoon, activities related to social minorities were developed in the library. Through the artistic work of the students, two members of the “Portuguese Council for Refugees” made everyone reflect on the strength of prejudices and the need to overcome them in search of a more just society. 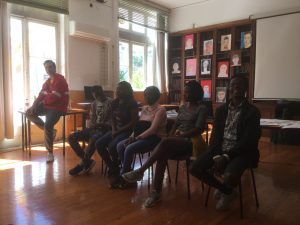 On Tuesday, all the members of the project met early in the Plaza del Comercio. There we climbed to the top of the Arch of Rua Augusta, from where we enjoyed some beautiful views of Lisbon. Then we ascended to the Castle of San Jorge and, after wandering for an hour through its noble walls and towers, continuously stopping to contemplate the panorama of the whole city which is dominated from there, we went down to the neighbourhood of Morería. There, teachers and students shared a tasty lunch in the dining room of the association “Renovar a Mouraria”, which welcomes and cares for immigrants. Finishing this, two volunteers of the association guided a walk through this picturesque neighbourhood that, from very old, welcomes social minorities and disadvantaged sectors of the population.

On Wednesday, all the participants went on foot to the old convent Madre Deus, current headquarters of the Tile Museum. The Portuguese guide offered us a complete explanation of the different styles of tile throughout history and then our students had the opportunity to decorate and paint a tile each. Two days later, when the elaborated cooking process was completed, they were picked up by the teachers and handed over to their authors, as an artistic souvenir. In the afternoon, while the teachers, gathered in the library of the school, talked about issues related to the project, the students carried out an artistic activity by Saulo, the art teacher.At the end of the afternoon, when the students had left with their respective host families, the group of teachers enjoyed a dinner enlivened by excellent fado singers in the Alfama neighbourhood. 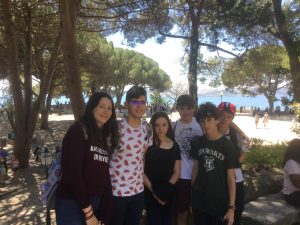 On Thursday morning, a tourist bus took us all to the Belém area. There we saw the famous tower and the monument to discoveries. We were able to visit the extraordinary Jerónimos Monastery, glory of the Manueline art, which caused everyone’s enthusiasm for the majesty of its proportions and the refinement of its decoration. The tombs of Luis de Camoes, national poet, Vasco de Gama, discoverer of the Pacific, and the cenotaph of the young King Don Sebastian, of romantic memory, especially attracted our attention.In the afternoon, we visited another of the schools belonging to the “Agrupamento”, which is named after Doña Luisa de Guzmán, a Portuguese queen of Spanish origin. There we especially enjoyed the recreation area, full of trees, benches and wooden tables, like a picnic area in the middle of the forest. Then we went to the Church of Our Lady of the Rock of France, which is located in the highest point of Lisbon and is one of the places visited by Cosimo de Medici. In this privileged enviroment we enjoyed a concert offered by the “Nuno Gonçalves” student orchestra, an extraordinary example of integration through music. 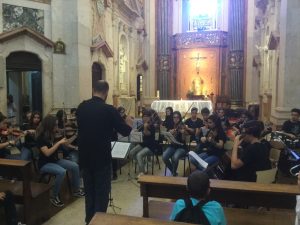 On Friday, the last day of our meeting in Lisbon, the teachers and foreign students travelled by bus to Sintra, accompanied by Dora, one of the main responsible for the project. Some of the younger Portuguese were heartbroken and shed some tears because they could not accompany us. In Sintra we enjoyed the beauty of the place, whose natural environment has been declared a World Heritage Site and whose mansions, around the Royal Palace, stand as a reminder of the elegance of times gone by. We visited the fascinating Quinta de la Regaleira, with its immense garden, spattered with small buildings designed according a program of Masonic initiation. We climbed a curious tower, descended to an artificial lake inside a cave and ventured into the depths of the mysterious initiatory well, of which it is said that only the straight of conscience are able to find the exit. I do not know if it would be because of this, but three students went astray, and only thanks to the expertise of our Sergio Ruiz, who was able to orient himself safely in the middle of that forest, we could be together again. 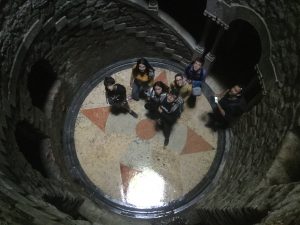 On the way back to Lisbon our bus stopped at Cabo de Roca, the westernmost point of the Iberian Peninsula. We went down to take a walk and some pictures. Unfortunately, the great beauty of the place was marred by the army of tourists swarming from the cliffs to the lighthouse.After returning to the institute, farewells began among those who would not see each other next day. Hugs were exchanged and some tears were shed. Some of them promised to meet next year and some others never forget each other. 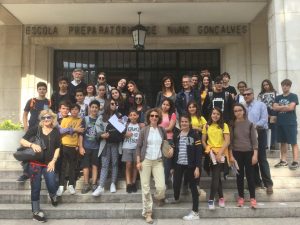 And eventually the Saturday morning arrived. The Spanish delegation met again in the beautiful Plaza de los Restauradores, bathed as never before in the radiant light of Lisbon. The Portuguese parents, extremely kind, praised the qualities of the Spanish students, who, in turn, had felt themselves so welcome in their homes. The young people embraced and exchanged promises, watered with sincere tears. When the bus left definitively, going away by the bridge of the Twenty-fifth of April, we all felt that a part of our heart was staying and that some day we would have to return in its search.

Chronicle of the Journey to Lisbon